And the heart pumps dry.


Footnotes in Gaza
Sometimes the books I enjoy the most are not recommended by a friend or carefully selected from my "to read" list. They are, like "Footnotes in Gaza" by Joe Sacco, random picks from a library or bookstore shelf. I was not even looking at books for myself, I was in the graphic books section searching for something that will rather entertain my oldest son, when I spotted the title that arose my interest. The author's name seemed vaguely familiar as well, whatever I read any magazine articles by Joe Sacco before  I  am not sure, but the fact that he published in some of my favorites such as Times and Harper's represented spoke well for the author and  I knew that I had to borrow "Footnotes in Gaza" . I started reading it as soon as  I got home and  soon I got so absorbed by its lecture that I almost congratulated myself for following my instincts...
Beyond the excellent graphic format - which makes it an enjoyable read even for someone who admits to get easily bored by historical books, especially non-fiction ones - the book is a well documented journalistic and historical  account on the IDF killingsof civilians in Khan Younis and Rafah during the occupation of the Gaza Strip by Israeli Defense Forces (IDF)  in November 1956 as the Suez Crisis was unfolding.
The book starts slowly by making the reader become familiar  with the geo-political context and historical events  which make Gaza Strip such an uniquely conflict prone area starting with  1948  and up to today :

The author continues to initiate the reader in the details of the political context beyond the Suez crisis and the invasion of Gaza Strip by Israeli forces by sketching the portrait of Jemal Abder Nasser's ambitions and his vision of a pan-Arab coalition, stopping for a short comment on the British and French commercial interests in the Suez Channel and trying to determine through eyewitness accounts the role played by the Fedayeen in the on-going conflict between Israel and the Palestinian refugees living in Gaza Strip. The Fedayeen  where a guerilla force composed of former Palestinian combatants as well as delinquents backed by the Egyptian government which was supplying the logistics and training. Focusing their attacks on military targets at first, the Fedayeen  were usually recording more causalities than the Israeli forces deed as their weapons, military discipline and training were inferior to the IDF. A twisted turn of events and politics switched the focus from military attacks to civilian attacks and in the spring of 1956 a Fedayeen assault on a mosque lead to 11 victims among which several children.

On personal note, one question following me since I finished reading "Footnotes to Gaza" : How comes  that so many IDF soldiers showed cruelty or at best indifference and lack of human compassion towards civilians? Yes, some where potential enemy soldiers or murderers -yet many of them were old men or boys as young as 15, they were teachers and merchants , some of them were peacemakers perhaps and some had been  living exemplary lives.  Considering the year when the killings happen : 1956, 11 years after the end of WWII  and the average age of active soldiers in the IDF , the Israeli soldiers had to remember the years of Holocaust as something that happened in their own time. The memory of those times when they could have faced , and some of them even had faced, humiliation and death just because everybody who held their religious beliefs, who belonged to the same nation was "the enemy" no matter what they had done or how they lived as individuals, that memory had to be still alive in their minds and hearts. And one hopes that the people who belong to a nation surviving so much harm, so much injustice are more likely to act most humanly: showing mercy, compassion, acting justly and avoiding the gratuitous humiliation and violence against their prisoners. Yet, in spite of what might hope, there is perhaps a harsher reality -most of us recall the fear instead. The thought that if they are acting too softly instead of being aggressively in offensive,  they may end up being those oppressed, those victimized... the hopeless ones.
Posted by Ana at 6:59 PM No comments:

Happines with you was a cry of despair 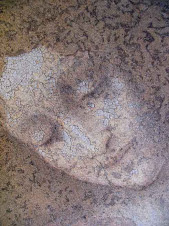